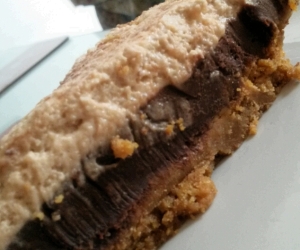 I had my in laws up for Easter this year and wanted to make a really special dessert that would feed 6, 2 of which had given up chocolate for lent! I thought about warm puddings, cheesecake, torte, all sorts, so I decided to make a combo. This was a seriously amazing dessert, super indulgent, really tasty and just so naughty! A crunchy ginger nut base, a layer of chocolate torte, topped with an almond cream – this is a real showstopper. Make it the day before you plan to serve and don’t think about the calories!!

First of all empty the pack of ginger nuts into a large bowl and crush them until they are like breadcrumbs. Melt the butter in a pan and add the gingernut crumbs to the pan, add the golden syrup and stir until everything is combined. Cut a circle of greaseproof paper the size of your tin and place it in the bottom. I used a large springform tin. Pour the gingernut mixture into the bottom of the tin and press down with the back of a wooden spoon to make a flat layer. Cover the top of the tin with clingfilm and pop in the fridge.

For the chocolate torte layer, break the chocolate into small pieces and melt in a bowl over a pan of boiling water. Measure out 500ml cream and the chocolate starts to melt stir in the cream, a little at a time. Keep stirring with a wooden spoon, add a tablespoon of golden syrup and 2 tablespoons cinnamon. When all the ingredients are combined, whisk in a large electric mixer until little bubbles start to form then pour the mixture over the gingernut base. Clingfilm the top of the in again and leave in the fridge for another hour.

For the almond cream topping add the rest of the cream to a large mixer and whisk until it starts to thicken. Add 2 tablespoons cinnamon, then the soft cheese. Keep whisking everything together, then add the ground almonds. I whisked my mixture for about ten minutes until it formed a lovely thick creamy texture.  Check in the fridge that the torte layer has set, it should be firm to the touch. Then spoon the almond cream onto the torte layer. Use a wooden spoon to flatten the top. Place your chocolate bunnies on the top and sprinkle with a little cocoa. Cover with clingfilm and leave to set in the fridge overnight.

When you are ready to serve the cake, release the springform sides of the tin and lift it off. Place the cake onto a plate or a cake stand and serve!

This is one of the most complicated recipes I have created, it is also one of the best. I think it’s great to have a lovely, restaurant quality dessert for special occasions. The almonds, chocolate, cinnamon and ginger complement each other perfectly and this is a perfect Easter treat. 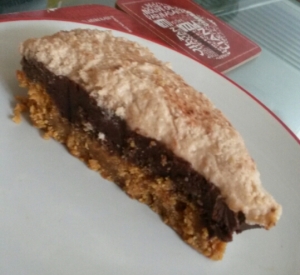